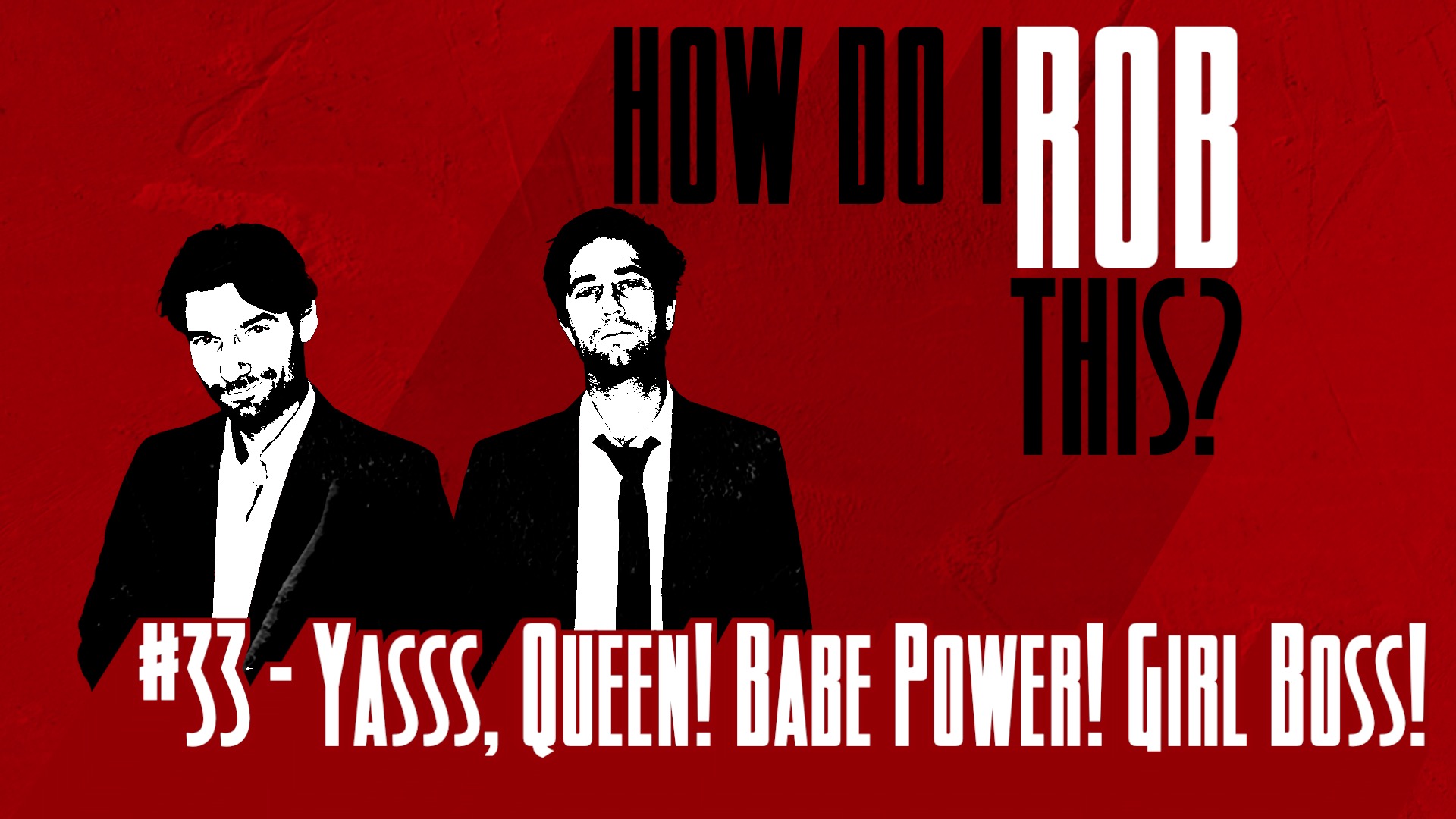 Just so this is clear! This isn’t the show now! We’re not busting scams, other people are far more competent at that.

All we are is two friendly gentlemen thieves planning the perfect heist and occasionally helping out people in need of not being scammed.

HerTeamOfficial (now Official Femfire) and ThtSoundsGay are two more scams on instagram. Listen to our episode and come to a shocking conclusion.

Stay safe out there!

You can reach How Do I Rob This on Twitter: @HowDoIRobThis

Or find out more about our heist plans on Instagram: @HowDoIRobThis

New episodes on the 7th of every month. You can find us on iTunes, Stitcher, Spotify, and YouTube – and please feel free to leave us a sweet, sweet review!

UPDATE NOTICE: Between publishing this post, HerTeamOfficial has yet again rebranded to OfficialFemfire on Instagram. Might be their regular schedule, but I’d like to think that we had a bit of a hand in this… 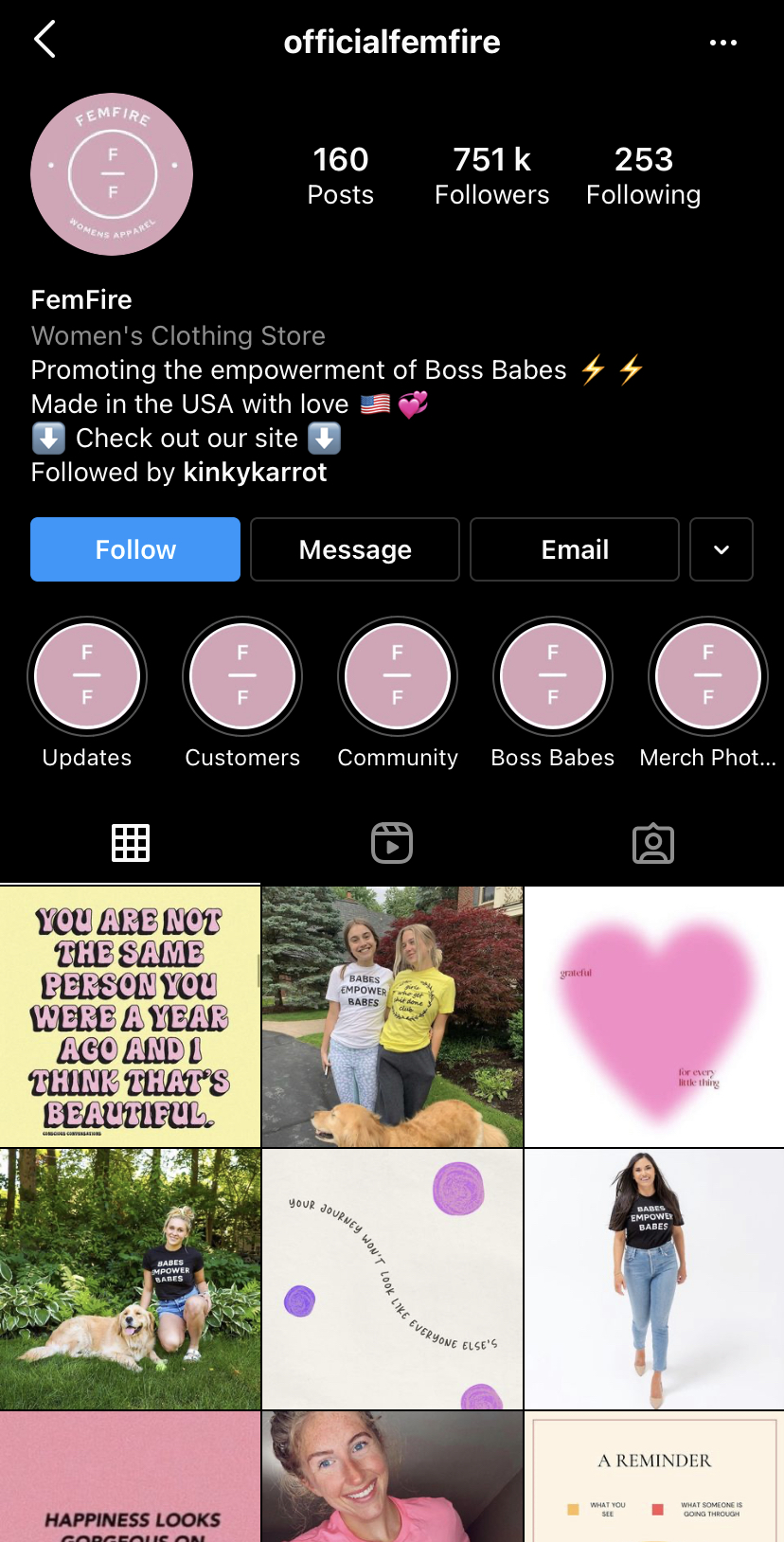 So first of all! Thank you, everyone for reaching out and for getting in touch about various scams. That’s much appreciated. We thought about veering into that direction, but it turns out all these scams are very, very similar. Once we can get back to regularly recording our regular show (which is fictional heist based on real world research), we’ll do that. Give it a listen maybe, we’ve got some fun episodes.

We still thought we’d take a closer look at some of these scams, because what the heck, right? And trust me, you wanna read this blog post till the very end for a satisfying twist. 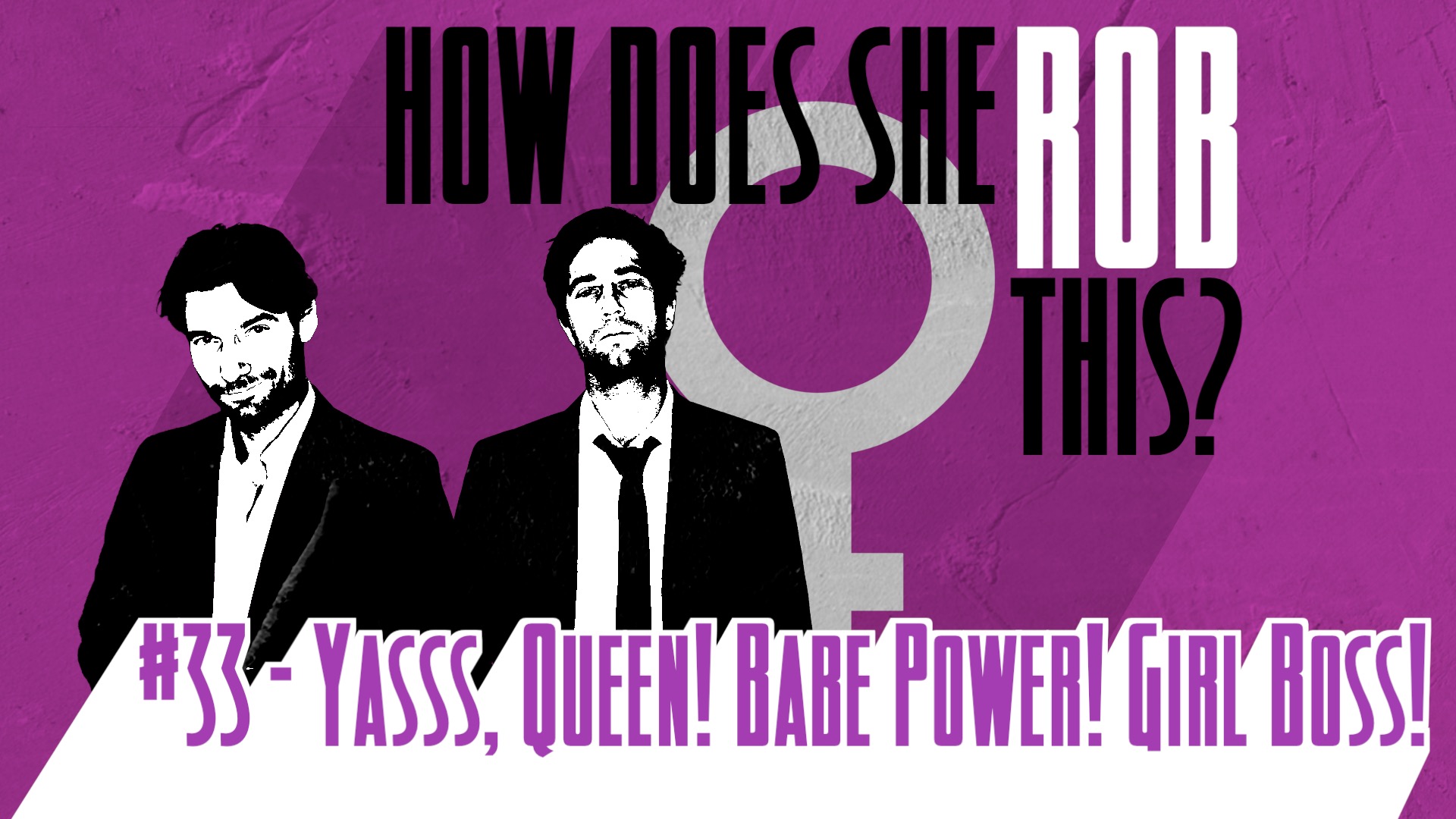 So, it all starts like these things usually start. With a bot account reaching out to us: 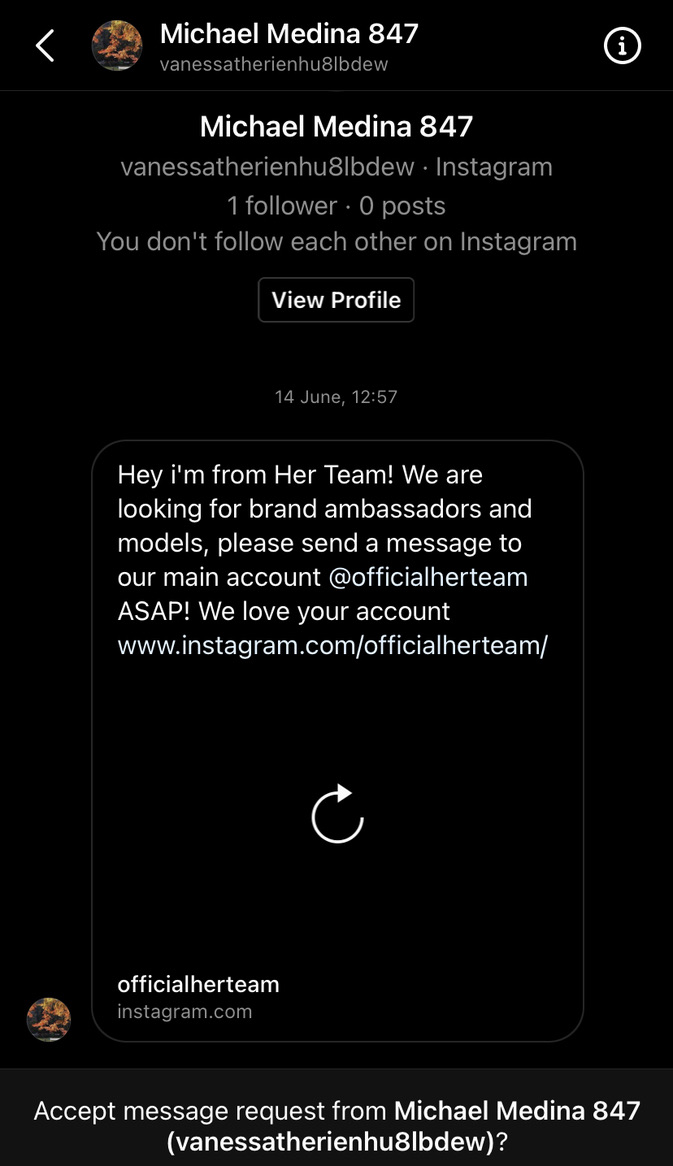 That’s very kind, Michael with a handle that says Vanessa, but who are we to judge someone whose name is mostly random letters and numbers?

Okay, so the business practice is eerily similar to Smoothmyballs. What you do is hire (acquire?) a bunch of bots and let them target hashtags. As to what they targeted here specifically is hard to say, but maybe I used #girlpower as I was listening to the Spice Girls doing the dishes? Hard to say, really.

The reason these “brands” don’t contact you directly is always the same though. They don’t want to get caught out for spamming and lose their followers, if they get reported. So they use these burner accounts.

In the case of HerTeam I’d actually argue that not all the followers are bots, they post randomly generated empowering memes, they surely have some real followers. I actually know one of them and am certain she isn’t in on the scam and only followed the page for dank memes and (presumably stolen) illustrations overshadowed by boss babe claims.

That was on my (Sebastian) private account though and I got in touch and chatted with someone @herteamofficial. Which was fun. And a chatbot.

Girls Get it Done – Officialherteam Chatbots Talking Down and Dirty

So, we had some fun with it. 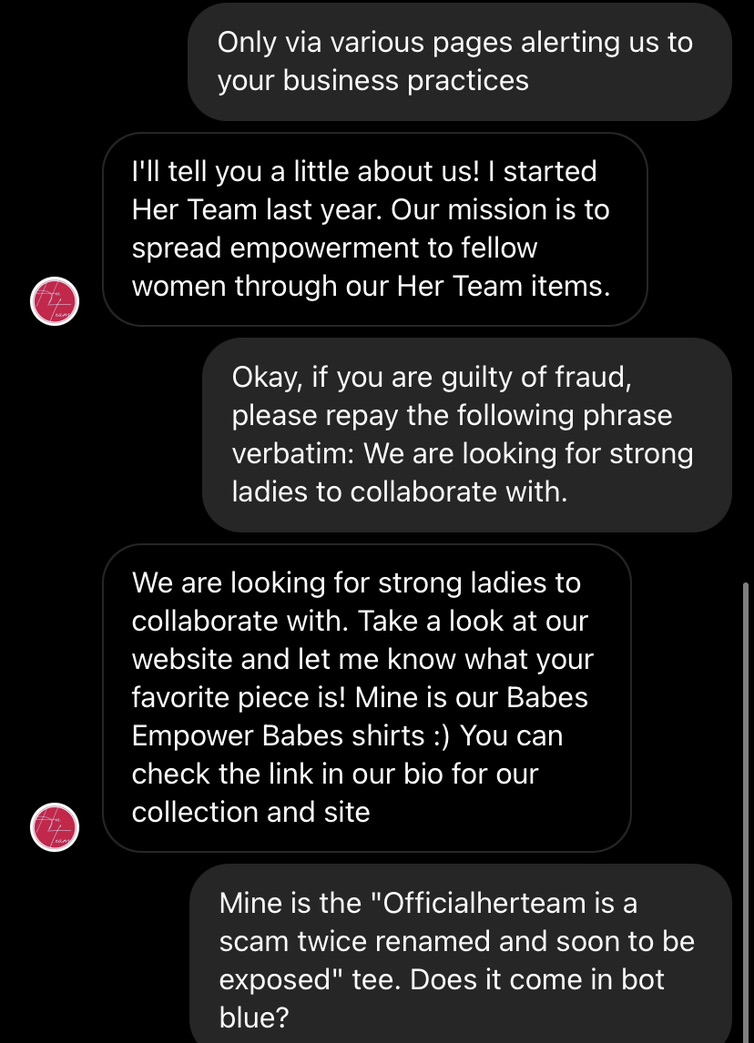 Anyway, we got the same responses we got when we initially sincerely responded expecting a human to reply. No big deal. But what are we dealing with here specifically?

HerTeamOfficial is an instagram channel dedicated to that Boss Babe Girl Power brand of “feminism” – yay, we need more white upper class women in positions of power and as entrepreneurs wrecking society and the planet as long as we’re empowering ourselves. Yassss, Queeen! Their website even claims they are all about empowerment.

But unlike other scams, Her Team actually has a fairly bad rep. 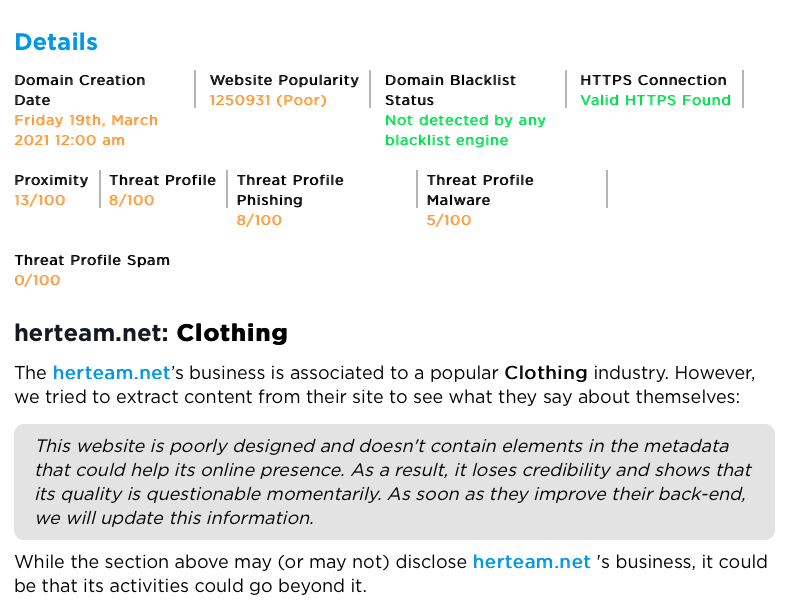 That’s a generic scam alert page. But users are also repoting the page to be anything but empowering (https://www.complaintsbureau.org/her-team/) 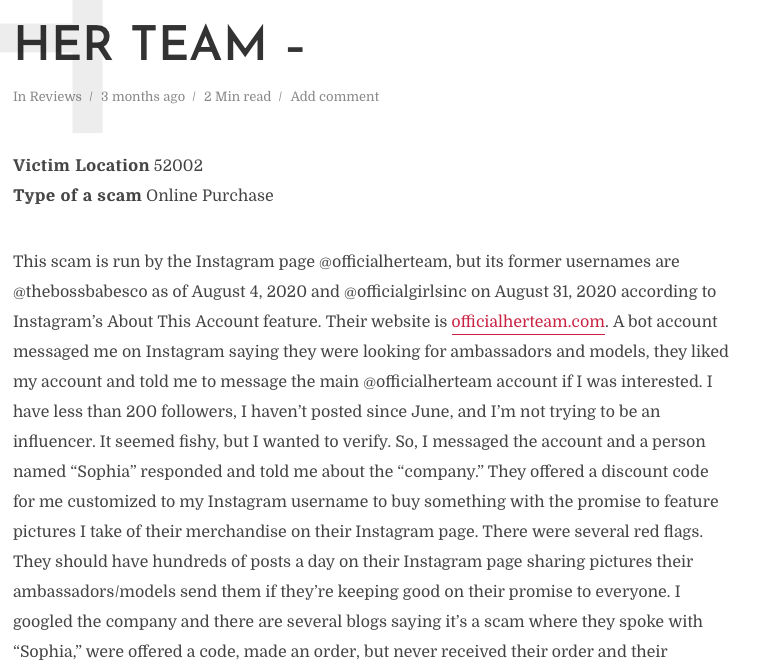 But okay, maybe that’s one case? Well… actually, a lot of users are complaining in the instagram comment section as well. They never received their overpriced merchandise. Some people do though… like, we looked into the stories they shared and the profiles looked legit.

Kudos for every girl for empowering these scammers by paying 40 USD for a tee that doesn’t look half as good as these shirts do on these already not great looking photos.

Surely though that can’t last forever? At some point your name will be burned beyond recognition and you have to fold. Or… rebrand perhaps? 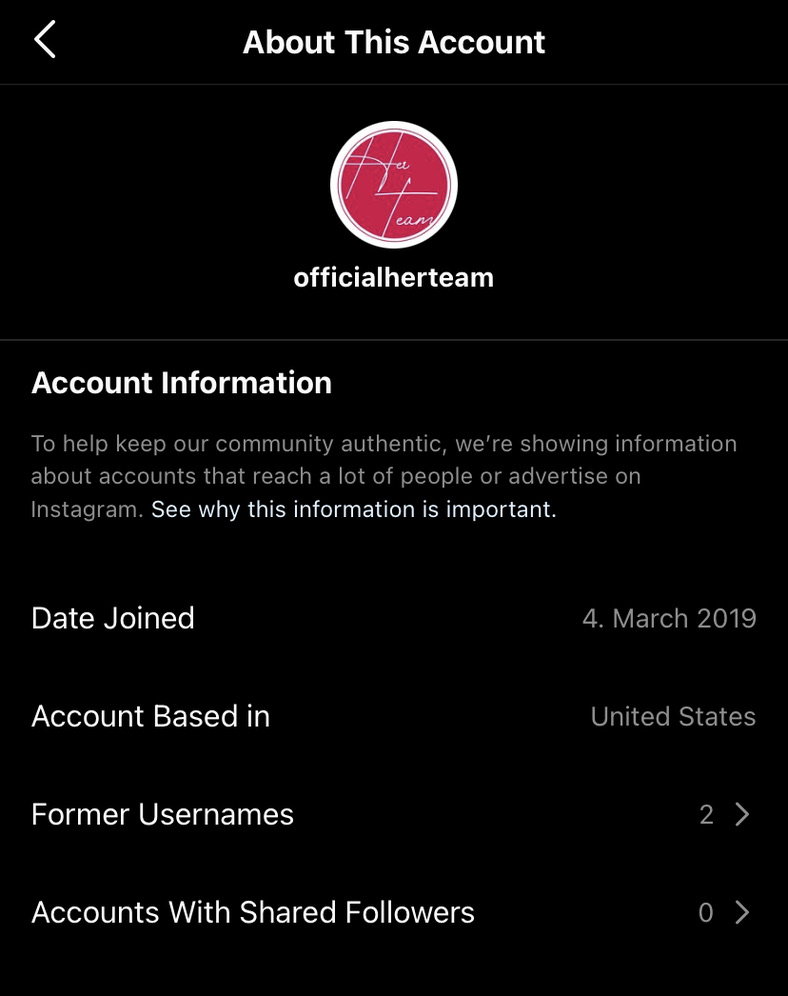 And in fact they have rebranded twice since 2019.

Most of their merchandise seems straight off of AliExpress and is obviously far cheaper in China where it’s being manufactured. Now! As to why some people never receive any products at all, we’re thinking it has something to do with what’s available. 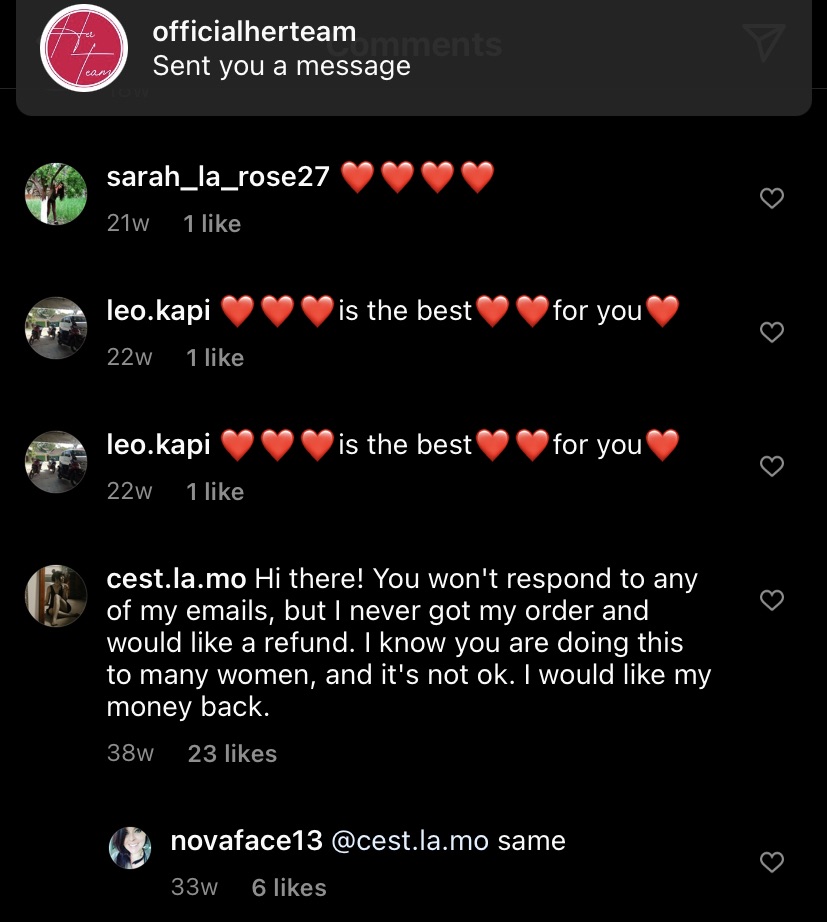 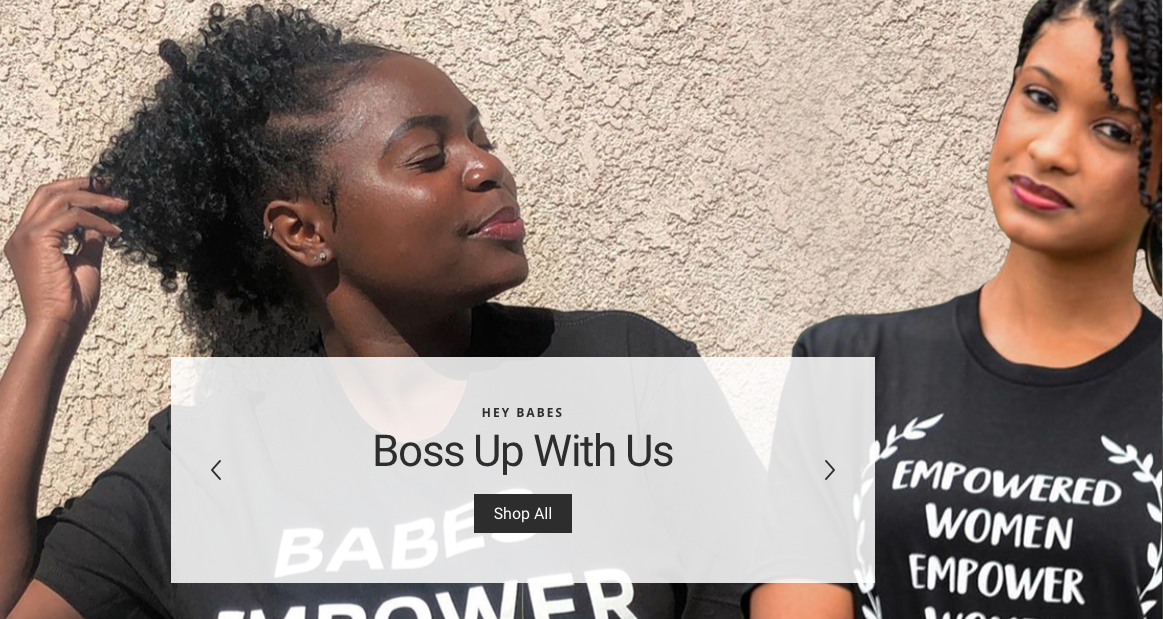 I mean, you don’t wanna mess up a perfect looking website like this, do you? Some girls get their overpriced tees, some get nothing. Doesn’t matter in the long run. It’s 3 or 4 USD more in mark up and as soon as the scam is plain for all to see, they’ll just rebrand. Again. And again. And. A. Gain.

Also, they literally just registered their site on March 19th 2021: 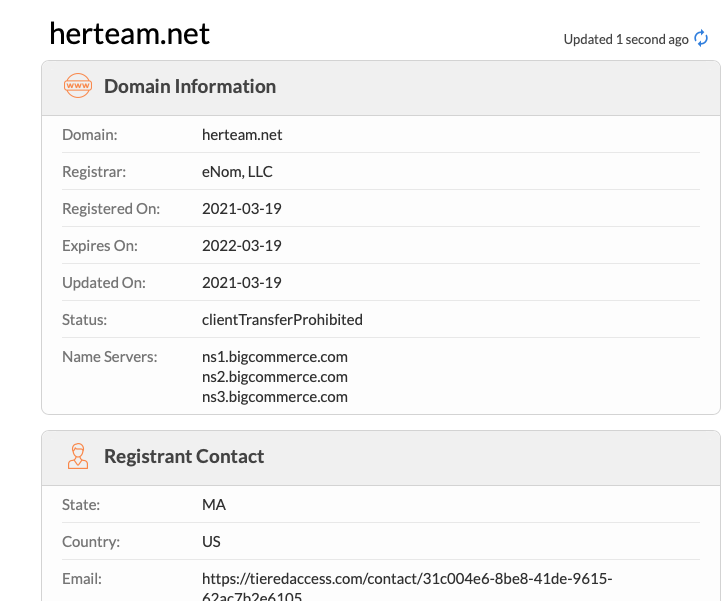 Obviously that’s never a good sign, but their business model isn’t meant to last in this ever changing world which we live in.

Too Gay to Be True – ThatSoundsGay is a Scam, too

But that’s not all for today, kids! Because the lovely Blue Budgie Productions has found us (@howdoirobthis on all socials) and she has made us aware of a scam making the rounds in the LGBTQ+ community.

ThtSoundsGay on Instagram. And no! Not our typo, it’s theirs. We have our very own typos, thank you.

Their instagram page is looking very similar to Her Team, but not empowering straight white girl babes, but the pride community instead. 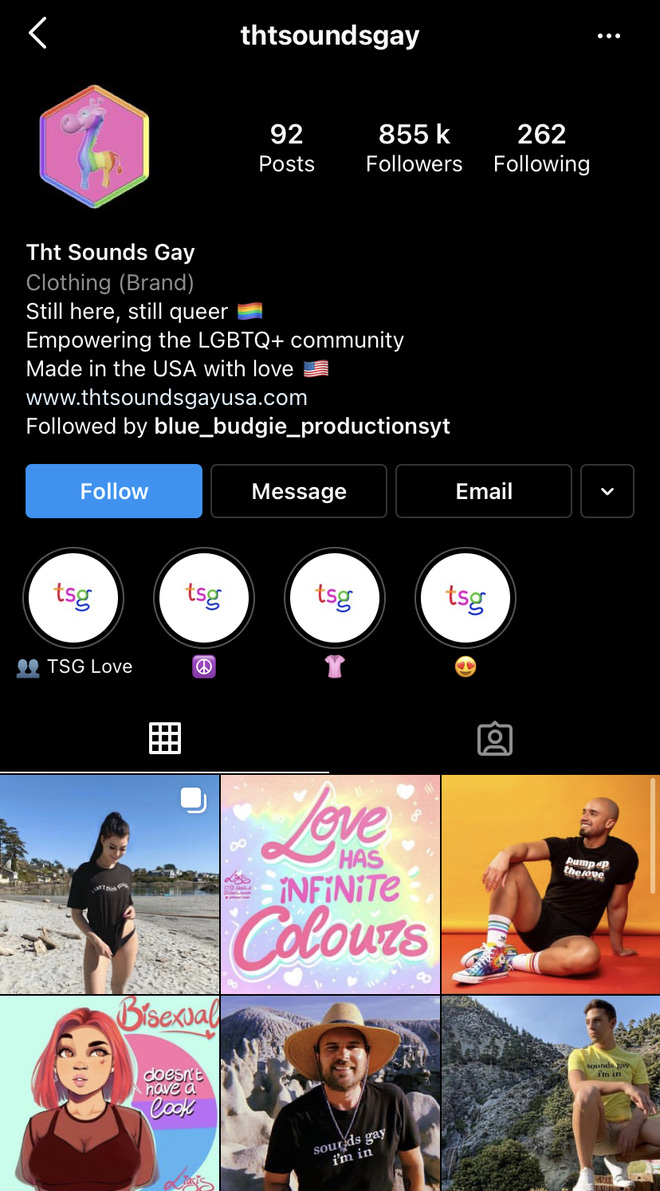 Impressive follower count and as with the girl scam, I wanna say not all of them bots. I mean, look at the account. Pretty pictures of Wall Mart quality tees and meme images they probably stole off of some artist’s page.

The MO once again is the same. A random bot with 0 followers targets you and tells you to get in touch with Thtsoundsgay. The -A- in that is massively overrated anyway. But looking at it, nothing would strike you as suspicious. Except for those cheap arse shirts. I mean, seriously. I know they are cheap AliExpress merch, but the manufacturing must be the same for a good fit, no?

And like all good scammers, they too got to rebrand a couple of times. You know. Burn a name, get a new one. Thrice bitten, fource shy. 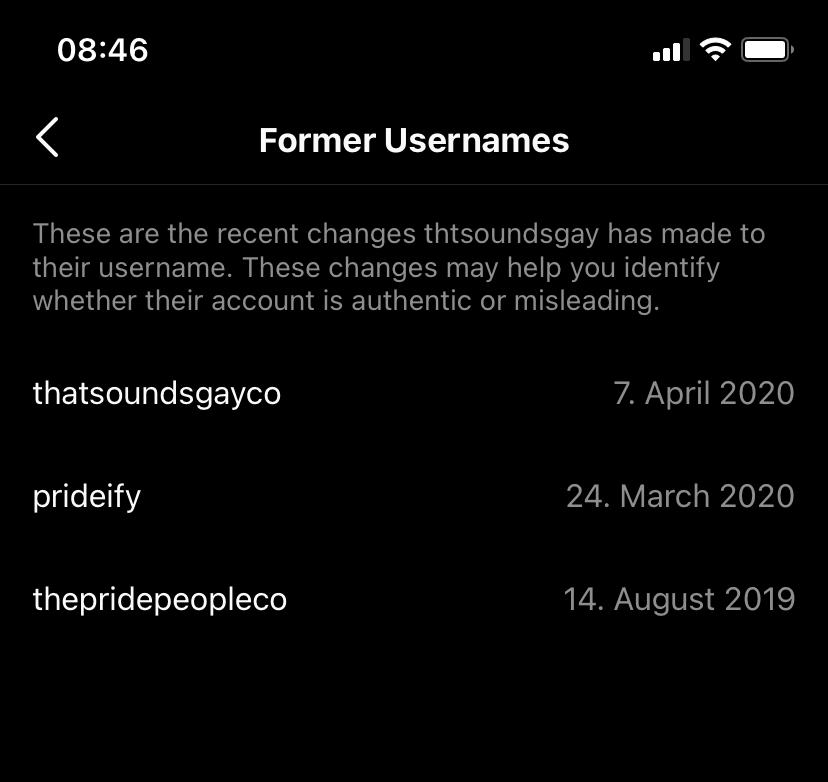 But! Unlike HerTeam Thtsoundsgayusa have provided us with a company address. Which is always like JACKPOT, except it never really is. 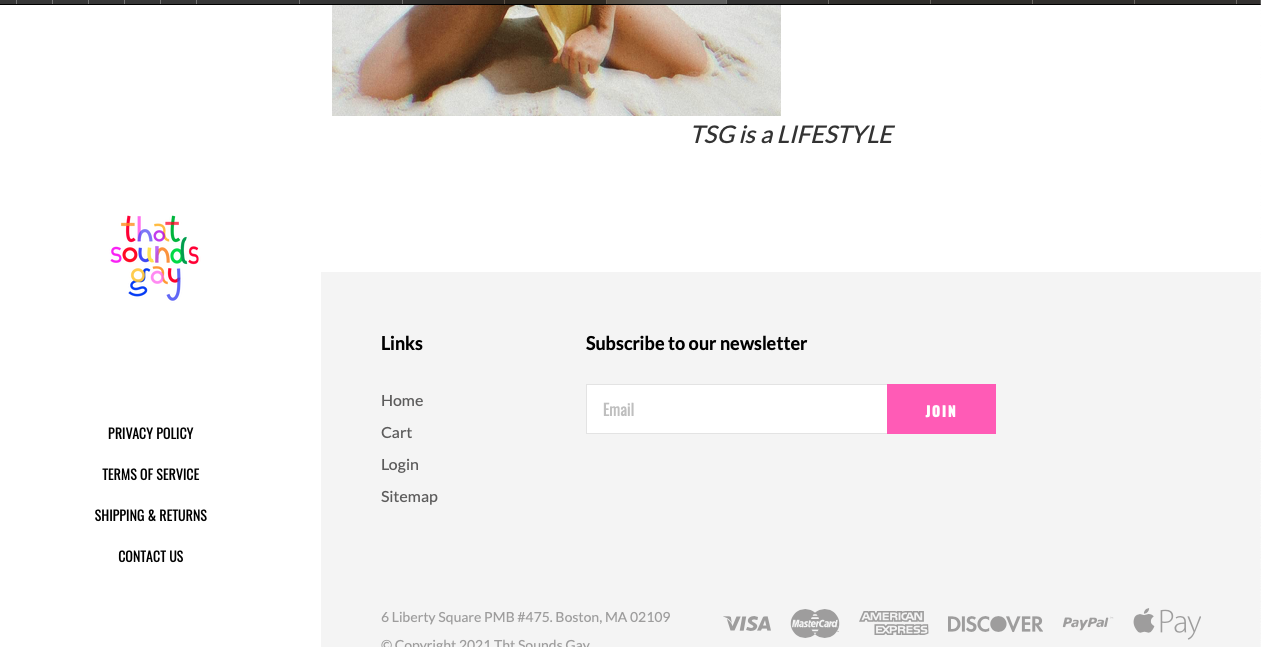 The PMB is a private mailbox located in this here store: 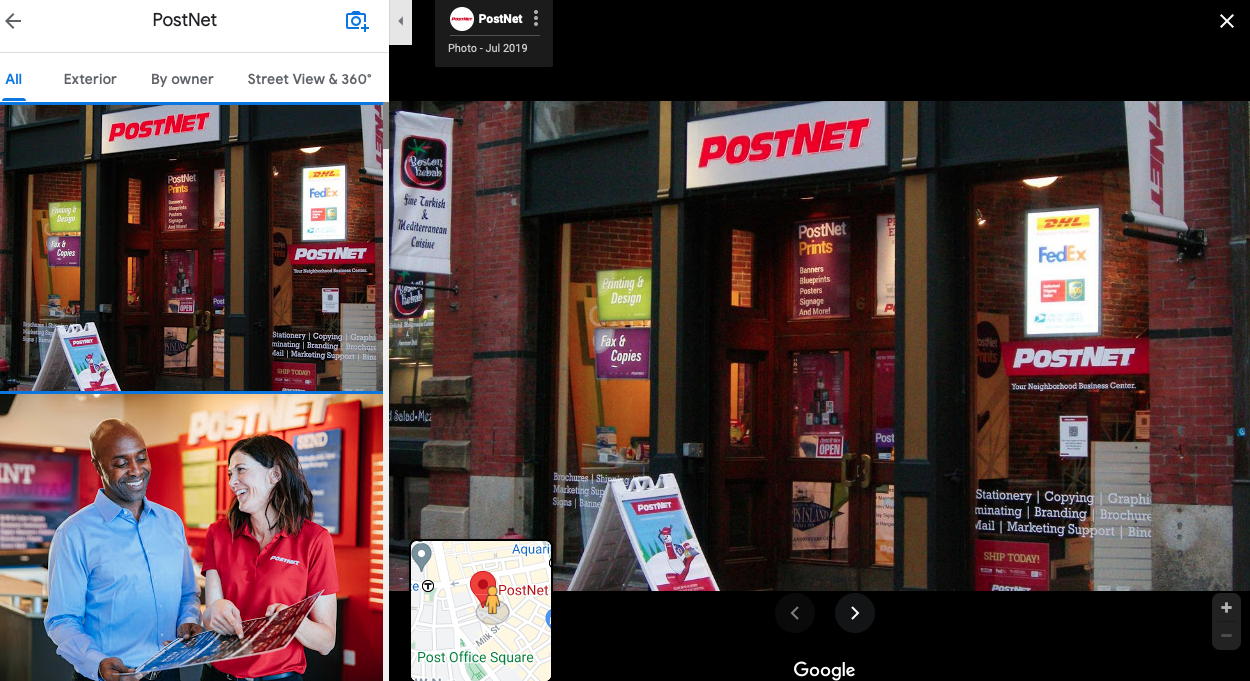 Nice enough Postnet store, certainly not their fault for hosting a mailbox company. But… yeah. That’s the company address. And if by now you haven’t figured out, that that’s anything but legit… they have no offices, no storage, no foosball table, no intern scouring the webs for memes to steal, no rainbow flag, just bots, potentially your hard earned money, and a postbox in Massachusetts, USA. Disappointing.

Their website was also very freshly registered, which isn’t great for these brand ambassador deals. How would any page – let alone a store – get to almost 900k followers in a few months? 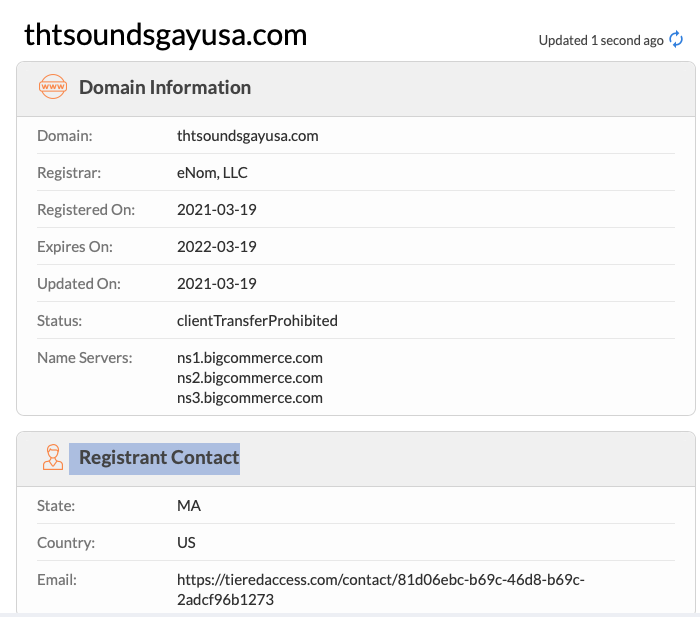 It was registered on March 19th 2021. Through eNom, LLC with a registrant in MA, USA. Hang on! Scroll up there, cowboy or -girl. That looks familiar! That’s the same company that HerTeam used and they registered the site on the same day that HerTeam registered theirs. They are even selling almost identically atrocious looking fashion with cheap prints and the registrant is also living in MA. Or – well – their post box is. 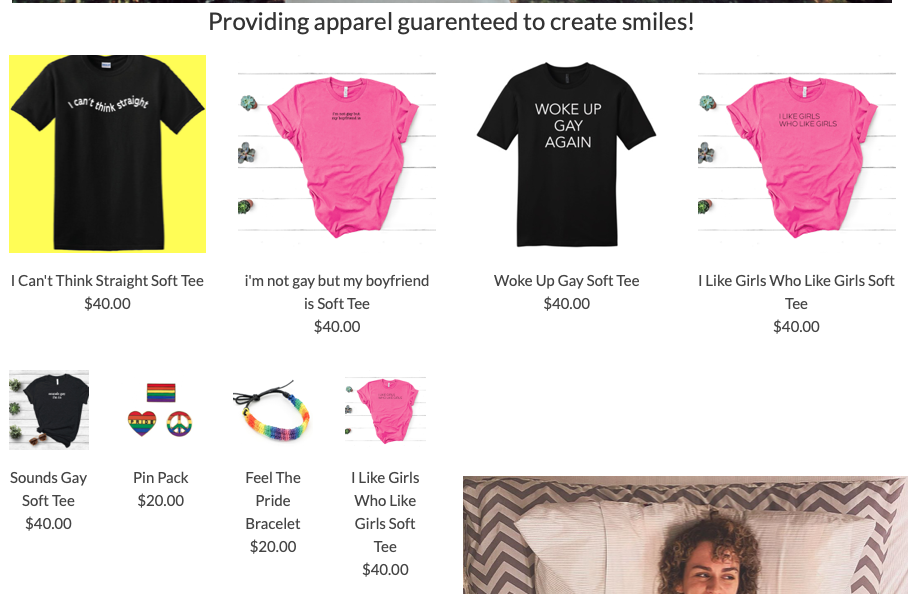 The tees are even priced the same. 40.00 USD for a t-shirt. Look at them! LOOK AT THEM! On the bloody promotional pics, that’s the best they could make them look for fuck’s sake!

So, case closed? Same scammer, two companies? Probably more. Always the same brand of empowerment and openness standing up for oppressed minorities and feminism and equality and lack of printing quality, when really it’s just a cash grab.

I guess… so, the lesson here is: If an account with no or few followers contacts you for a brand ambassador deal for a different site, it’s probably too good to be true. If a brand really wants to work with you, they’ll get in touch, not their mechanical flunkies.

Proud to say that HerTeamOfficial and ThtSoundsGay have officially been exposed as scammers. Glad we could help, nothing to do but close our wrinkly trenchcoat and strut out of here.

Imagine we were on our way out of the door as we turn heel, walk back in, and with our eyes crossed ask for one more thing!

Because while we couldn’t identify the registrant (due to their privacy being restricted), we could identify the company registering the domain. Registrar as they are sometimes referred to in Muso-terms.

A company called Enom, which — terrible name, not gonna lie — and as always it’s hard to tell how much they are in on the scams and how much they are just convenient and/or have high privacy standards. But looking at their site one thing pops out. 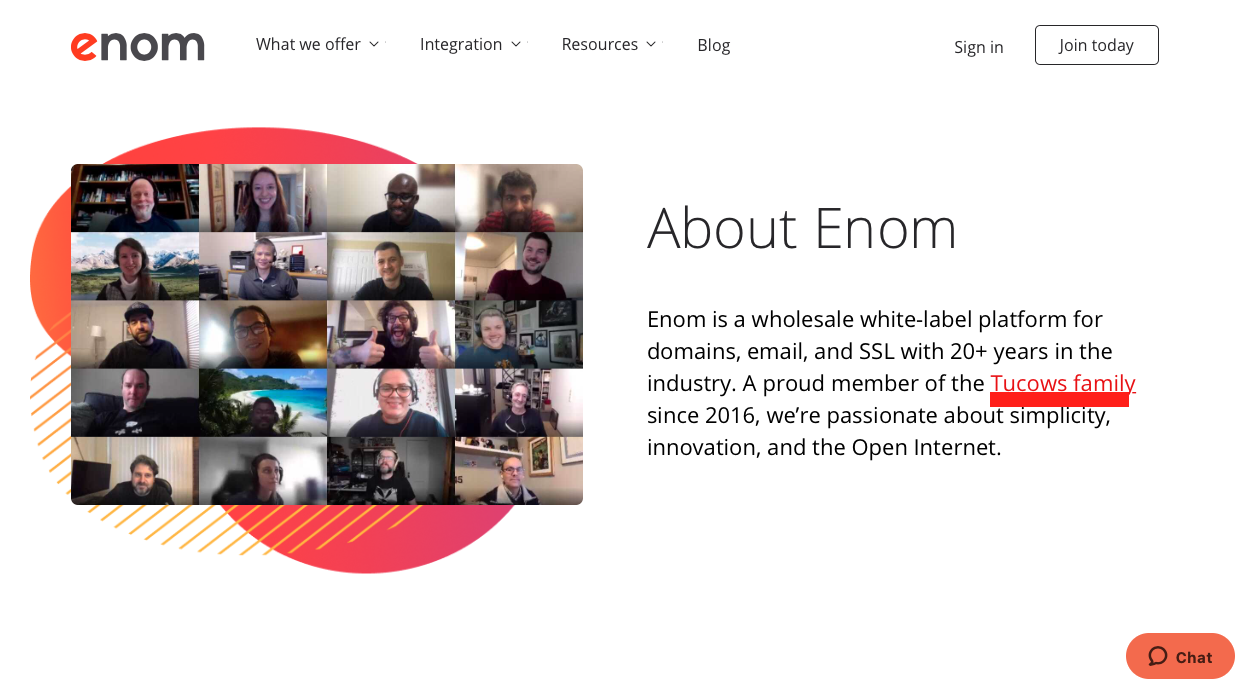 They are a member of the Tucows family. Tucows, the company that registered the Smoothmyballs scam from their HQ in Canada.

Rest assured, we’ll stay on the Tucase and keep a close eye on Tucows and the very day we can pin them down with enough evidence we’re gonna have ourselves a nice Tusteak.

You can reach How Do I Rob This on Twitter: @HowDoIRobThis

Or find out more about our heist plans on Instagram: @HowDoIRobThis

New episodes on the 7th of every month. You can find us on iTunes, Stitcher, Spotify, and YouTube – and please feel free to leave us a sweet, sweet review!

How Do I Rob This?

How Do I Rob This?

Planning the Perfect Heist. A Lot.

OfficialFemfire and ThatSoundsGayUSA – Instagram Scams for Girls and the LGBTQ+ Community

Smooth My Balls Exposed (Again) – Follow Up from the SEO-Wars

Smooth My Balls – Uncovering a Scam